Topic Progress:
← Back to Lesson
Although ticks are generally not considered poisonous, some ticks carry and transmit serious diseases such as Rocky Mountain spotted fever, Lyme disease, and tick paralysis. To avoid ticks, you should wear long sleeves and keep your pants tucked into your shoes or boots during hikes or walks in areas prone to high tick populations. 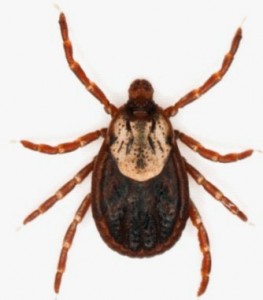 Ticks don’t bite in the sense of a sudden chomp. They bite into the skin and feed on blood. By continuously biting, they can burrow underneath the skin so they’re barely noticeable.

Lyme disease is a bacterial infection you get from the bite of an infected tick. The first symptom is usually a rash, which may look like a bull’s eye. As the infection spreads, you may have

Lyme disease can be hard to diagnose because you may not have noticed a tick bite. Also, many of its symptoms are like those of the flu and other diseases. In the early stages, your health care provider will look at your symptoms and medical history, to figure out whether you have Lyme disease. Lab tests may help at this stage, but may not always give a clear answer. In the later stages of the disease, a different lab test can confirm whether you have it.

Antibiotics can cure most cases of Lyme disease. The sooner treatment begins, the quicker and more complete the recovery.

After treatment, some patients may still have muscle or joint aches and nervous system symptoms. This is called post-Lyme disease syndrome (PLDS). Long-term antibiotics have not been shown to help with PLDS. However, there are ways to help with the symptoms of PLDS, and most patients do get better with time.

According to the Center For Disease Control,, Rocky Mountain spotted fever (RMSF) is a tickborne disease caused by the bacteriumRickettsia rickettsii. This organism is a cause of potentially fatal human illness in North and South America, and is transmitted to humans by the bite of infected tick species. In the United States, these include the American dog tick (Dermacentor variabilis),Rocky Mountain wood tick (Dermacentor andersoni), and brown dog tick (Rhipicephalus sanguineus).

Typical symptoms of Rocky Mountain Spotted Fever include: fever, headache, abdominal pain, vomiting, and muscle pain. A rash may also develop, but is often absent in the first few days, and in some patients, never develops.  Rocky Mountain spotted fever can be a severe or even fatal illness if not treated in the first few days of symptoms. Doxycycline is the first line treatment for adults and children of all ages, and is most effective if started before the fifth day of symptoms.   The initial diagnosis is made based on clinical signs and symptoms, and medical history, and can later be confirmed by using specialized laboratory tests.

A few deaths have been attributed to tick paralysis but those were the exception to the rule. Once the tick is removed, the victim normally begins to improve. Treatment with antibiotics is likely depending on the severity of the disease.

The most common sign of tick paralysis is leg weakness that progresses to paralysis as long as the tick is still attached. If the condition worsens without detection, respiratory arrest and death are possible.

We also offer a free certificate of completion. To receive the certificate you must pass a 50-question test with a score of 70 or higher. Check our Basic First Aid Certificate of Completion page for more information.