Topic Progress:
← Back to
Computers In Your Life
Today’s world runs on computers. Just about every aspect of modern life involves a computer in some way or another. Those people who do not have experience with computers and software are at a severe disadvantage in work, leisure and daily life. As technology is advancing, the scale of computer use is indeed increasing. Computers, widely known, are used by big companies as well as individuals. Computers are efficient. They ease people’s onerous jobs by offering them handful software and applications,designed to offer more convenience. To illustrate, rather than writing manually by hands, an author can benefit from the use of Microsoft Word. With the facilities Microsoft Word provides such as word counter and vocabulary and grammar checker, the author can save his time thus able to finish within his deadline. Moreover, computers are able to perform difficult tasks with better calculations. 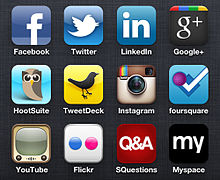 Technology Is the Future

Computers offer a quicker way to gain information which is by providing an internet access. Up to this moment, many internet browsers and applications have been invented, for instance, Mozilla Firefox, Google search engine and Microsoft Outlook to organize emails. These applications surely contribute a lot to a much easier way to gain information.

Computer skills are required to be hired in companies these days. Imagine if two candidates are interviewed, one of which knows nothing about computers while the other does. The employer will definitely hire the latter. Furthermore, with computer skills, one can build his own company and expand his business. He could perhaps work online and export his goods or service.

A computer is a good product to have at home. There are so many benefits to owning your own computer. It allows you to be able to write letters, articles, stories, reports and other things easier and faster. If you own a printer, you can easily write a letter to a friend or family member, print it out and send it to them. You can save your written documents on your home computer and have easy access to them when you need them again.

Having a computer at home allows you to have access to work from home jobs such as research, data entry, writing and other work-from-home jobs. With a computer at home, you can easily communicate with friends and family through email, social networks and instant messaging. Using a computer to communicate is cheaper than calling friends and family long distance. You can also communicate with co-workers, your boss and anyone else you meet on the Internet through your own computer.

Having a computer at home means your own personal entertainment source. There are literally thousands of games on the Internet which you can play anytime you want to. You can also watch movies and your favorite TV shows on DVDs. You can also join social networks and interact with your friends on a daily basis. 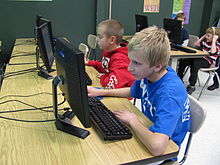 Children working on computers in a classroom

At most colleges and universities, their students are familiar with blackboard, a course management system that is used quite frequently in order to stay in touch with teachers, figure out homework assignments, and keep track of grades. While not all classes utilize this technology, it can be very helpful especially for online courses. With technology growing and advancing so far forward we now have the ability to learn and take classes from the comfort of our own home.

While many students still go on campus, there is no shortage of computers. Most colleges have at least one mega lab with nearly a hundred computers. But if you wish to bring your own laptop there are plenty of wireless hot spots where you could get a connection to the internet from anywhere on campus. Understandably lugging textbooks around campus may seem exhausting and tiring, you now have the option to get an electronic e-Book of most textbooks needed for class.

Most people are knowledgeable on the fact that computers are widely-used in colleges and at universities, but let’s take a step back and take a look at the ways in which computers are used in elementary schools. The biggest benefit of a computer being used in a classroom is that it can provide many different study tools depending on the class. They can provide electronic flashcards, math games, and even things as simple as crossword puzzles. Although a computer cannot replace a teacher, it can help expand a students independent thinking skills by allowing activities to be taken as many times as needed. Most of the activities found in classrooms are very interactive which helps keep the student interested. Also, we must not forget that because modern day children are drawn towards electronics, they are more compelled to engage in study activities on a computer rather than a sheet of paper.

Working on a computer at an early age helps build fundamental skills needed later on in life. At a young age a child can learn how to fully operate the basic external hardware of a computer like the screen, keyboard, or mouse. With enough exposure to computers and their components, a student can become more efficient for the following years of school and even their future career.

Computers On The Job
If you have seen any older movie (or SpongeBob) you have probably seen people getting to work grabbing their time card and getting it stamped to show what time they have arrived at work. This is called an authentication system or timesheet. While now the authentication system is more digital than before, the concept still applies. This isn’t the only use of computers on the job or at work in general. For instance say there is a presentation you must give to the board of directors, you might want to make a PowerPoint to give visuals to help drive home your point. Or perhaps you work retail and the pair of pants a customer wants is out of stock, you could easily order it online for them, and minimize the headache of shopping for those who hardly shop. Whatever the case, computers can help. 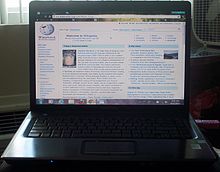 Portable computers are compact and fully functioning versions of a regular desktop computer that are designed to be mobile. While they rely on rechargeable batteries or an electrical outlet for power, they allow a person the freedom to move around while still being productive. Their mobility alongside their ability to operate similar to a desktop make them powerful tools for businessmen, students, and common individuals alike. Whether giving or preparing a project or presentation, taking notes or studying online, or simply connecting to the internet from a cafe, portable computers have become essential for individuals who wish to work, study, or play on the go. Portable computers come in three basic versions which include the laptop, tablet, and netbook. 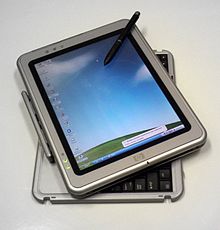 Laptops are thin computers that contain a keyboard and monitor folded on top of each other so that the top half is the visual display and the bottom half is the input. Laptops are commonly called “notebooks” do to this folding feature and their thin appearance. Recently, touch screens have been introduced into some laptops allowing some operating systems like Windows 8 to open applications with the touch of a finger. While laptops are comparable to desktops in their use, their smaller size results in some small amounts of the computing power and functionality being lost. However, their compact size allows them to be stored when not in use and the familiar “nest” of wires associated with linking up a desktop is reduced to a single power cord. Laptops are also better at “creating” fully functional content when compared to a Tablet or Mobile Device (such as a cell phone). If you require the ability to write reports or long e-mails, to use a spreadsheet in order to crunch numbers, to create a “PowerPoint” presentation, to rearrange music libraries or photo albums, or to edit pictures then you will need a desktop, laptop or a netbook. Tablets and Mobile Devices are more designed to consume content than to create.

Tablets are smaller than laptop PCs, very lightweight, and extremely easy to carry, but they lack the processing power of a laptop as well as a keyboard input. They rely, instead, on a stylus and touch screen. For those who are hardcore gamers, giving business presentations, or conducting heavy research a tablet doesn’t offer the speed and efficiency that is needed to complete these tasks. However, if a person is more of a casual internet surfer or “lightweight” game player then a tablet can handle what computing is needed to do this. They can browse the web relatively easy and stream movies or Youtube videos too. It should also be noted that tablets have become handy for other lightweight tasks involved with simple music/DJ production like FX and mixing as well as live sequencing. Some artists and designers are now using their tablets for preliminary sketches that they transfer into design software and programs on a full powered laptop later on as well.

Netbooks are similar to laptops but differ in size as well as processing. While netbooks are smaller versions of laptops, they have been designed, to the best of their ability, to have the same functionality as laptops and PCs. A netbook’s computer display will rarely reach above 10″ or 12″, and are more commonly smaller than this, whereas some laptops can contain up to 15.5″ of display screen. Netbooks have been around since 2008, roughly, and have revolved around their ability to connect to mobile networks such as the wifi at your local cafe or restaurant. Because of this feature, it has changed the laptop industry and has been heralded as a revolutionary and pivotal focal point in the production of laptops and netbooks. Since then this capability has now become a standard among both. Even though they don’t maintain some of the functionality and computing power as their desktop and laptop counterparts, they are still capable of word processing, mathematical computation, and other productivity programs that businessmen and students use. On top of that, they are also extremely durable and affordable which make them perfect for educational tools. Students will find them easy to manage, organize, and carry around as well as a “distraction free” resource because of their minimalistic capabilities. Couple these advantages with internet access to mobile hotspots such as school libraries and it can be easily seen why this device had dominated the market for so long. It has only been a recent trend for individuals to pick up the tablet despite it’s rudimentary processing power and it has been speculated that this is due to the tablet’s sleek design and effective marketing strategy toward the younger generation.

The text for this course is available from WikiBooks under the Creative Commons Attribution-ShareAlike License.